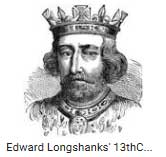 We recently came across this article that was published in the Kincardineshire Observer/ Mearns Leader on 10th January 2014. It is still relevant to this day as the artefacts are on permanent display in the museum. Those interested in metal detecting and local history may wish to view these finds in the comfort of our museum.

A coin dating back to the 13th century has been found in a field very close to Stonehaven harbour and is on show in the Tolbooth Museum.

The coin is a Long Cross silver penny of the reign of Edward 1, minted in Bristol in the period 1272 – 1304. Earlier this month, former Stonehaven man Keith Knight, who is a keen metal detectorist, found his oldest coin to date in fields near to the harbour.

Edward 1, king of England from 1272 to 1307, was nicknamed “Hammer of the Scots” and also “Edward Longshanks” - presumably owing to his height. He campaigned in Scotland in the 1290s to capture William Wallace and also gain control over the country. He had Wallace tortured and executed in London. Edward is known to have invaded Scotland with an army of around 40- 60,000 men, and allegedly crossed the Causy Mounth road and camped at Durris Castle and at Kincardine O’Neil.

It is possible that this particular coin may have been carried by one of Edward’s soldiers. Keith has also found a similar Edward 1st Long Cross penny in the Banchory area which further suggests that Edward’s army reached the North-east of Scotland. Keith told the Mearns Leader that the coin was unusual in Scotland: “Up here the coins are very rare. ‘‘It is hard to believe that, 800 years ago, this may have been a casual drop by one of the soldiers when they took the ancient coastal path to Stonehaven.”

Keith, who now lives in Banchory, has been detecting for over 20 years and has found other very old coins in the same fields around Stonehaven, including an Elizabeth 1 silver sixpence dated 1597, a James 1 silver groat from 1605 and many Charles 1 and 2 copper coinage including Turners and Bodles (half groats), and also Cartwheel two and one penny pieces dating from 1795. He has also found many personal items such as ‘Dandy Buttons,’ thimbles, and Georgian and Victorian costume jewellery. The latest and other coin finds have been registered with Treasure Trove Scotland and assessed by archaeologist Dr Natasha Ferguson from the unit in Edinburgh.

Keith also has a possible bronze spear head or sword fragment found in the same fields around Stonehaven. It is believed to be over 1500 years old and is currently being assessed by Treasure Trove Scotland. Many of Keith’s finds, including his latest Edward 1 penny, are currently on show at the Tolbooth Museum. Over the years, Keith Knight has detected all over the UK with finds as early as Roman coins and brooches from the 1st and 2nd century AD.